THE MONOLITH AND THE LADY OF DOVES II (NYARLATHOTEP) 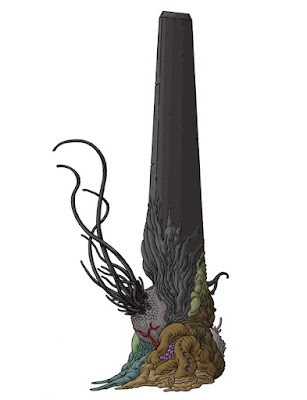 THE MONOLITH AND THE LADY OF DOVES II (NYARLATHOTEP)

"She saw nothing but a flat tar-black thing dominating the middle of the space. The dark was rendered a bluish brown around it with the heavy stench of vegetation. She held her thumb to her phone, then swiped open the flashlight. The lens flared on but the light was swallowed at once—she saw it pulled out in an oblong smear and it was gone into the black slab."

"Soon the black mass eased out of its gloom and she saw it was a monolith, reaching close to the mossy ceiling. A 2001ish thing, but malformed at its edges. Carol leaned around its side and there was Shanice, on her knees and elbows in the dirt, folded over in supplication with her hands covering her face."
Michael Wehunt, The Loved One

Email ThisBlogThis!Share to TwitterShare to FacebookShare to Pinterest
Labels: Michael Wehunt, Nyarlathotep, The Monolith And the Lady Of Doves