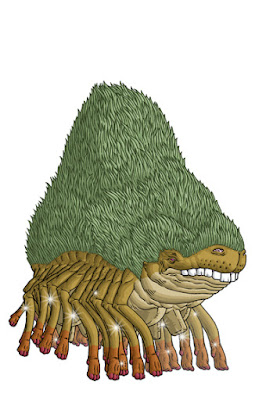 HILL BEAST
"'The beasts,' she said. 'These beasts we're on.'"
'What beasts?' It was like having a personal mosquito.
'These ones with the green fur,' she said and giggled. 'People think they're just hills, but they're beasts.'

"'That's why it feels warm,' said Leslie. Don't pull on its fur, Gramma. It might hurt it. 'Nen it'd get up. And spill us on the ground. And open its big mouth - and still out its great big teeth -'"

Posted by Michael Bukowski at 1:00 PM

Email ThisBlogThis!Share to TwitterShare to FacebookShare to Pinterest
Labels: And A Little Child, Hill Beast, Stories From the Borderland, Zenna Henderson