THE THING WITH THE OYSTER FACE 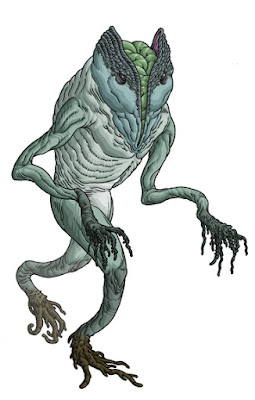 THE THING WITH THE OYSTER FACE
"'If there's anything deader-looking than a watery-blue oyster that's been open too long,' he said, 'I don't know what it is.'"

"'It had a head, a great round head that was as hairless as the rest of it. And a face - I cannot make you see it as I saw it. Staring into it, I could only think of an oyster. A monstous, wet, blue-gray oyster, with two darker spots that must have been eyes. It had arms. At least, two masses of matter attached to either side of its body reached out a little toward me. There were no hands on the ends of them. Just strings of - corruption.'"
Robert Arthur Jr., Believers
Read Scott's full essay on his blog!

Posted by Michael Bukowski at 6:00 PM

Email ThisBlogThis!Share to TwitterShare to FacebookShare to Pinterest
Labels: Robert Arthur Jr., Stories From the Borderland