THE IDOL OF THE HEADLESS MEN (NYARLATHOTEP) 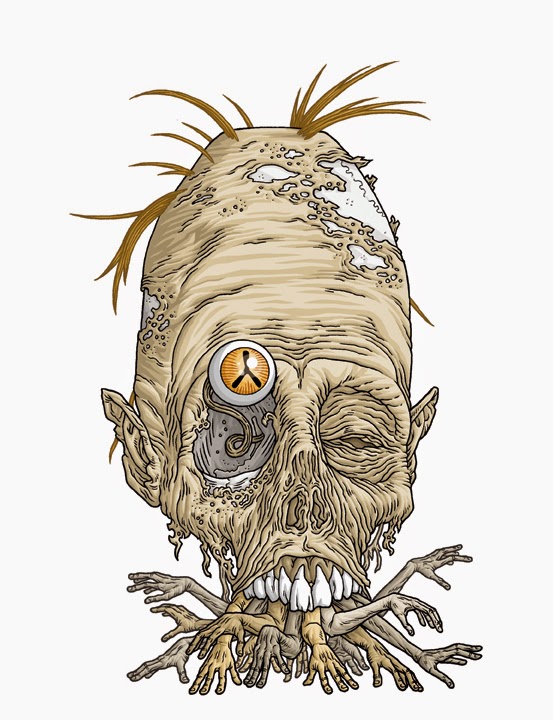 THE IDOL OF THE HEADLESS MEN (NYARLATHOTEP)
"The massive crypt door fell from its hinges with a resounding clang, and they saw what the Professor had brought back with him from his expeditions. At the time he had carried it in a crate no bigger than a bread box, but it had grown in the years since. As it rolled forth from the tomb, it looked at first like a giant boulder—maybe one of the papier mache boulders that decorated Kirby's sets. But then as it came to a stop they could make out its features and they recognized it for what it was: a mummified human head, albeit one the size of a camera truck."

"That would have been enough, of course. To freeze their blood, to send them running, but it wasn't the end. For a moment the grisly thing just sat there, resting on the place where its bottom jaw should have been, and they were allowed the blissful illusion that its movement had been a natural occurrence, the result of it becoming unsettled within the tomb. But then they saw one horrid eye peer at them from a gaping socket, and then retreat on some kind of stalk, as though it was not the eye of the head at all, but of some creature that dwelled within."

"With a sound like the grinding of giant teeth, the skull began to rock back and forth, and they saw masses of human arms—of normal size, but as mummified as the head—scrabbling at the ground from beneath it. One by one, the gnarled hands found purchase, and then the head began to lurch toward them, pulled along by a tide of arms, like a hermit crab dragging its shell."
Orrin Grey, The Cult Of Headless Men
Written Exclusively For an Illustro Obscurum Collaboration