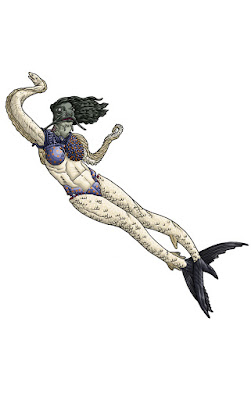 DIVER-IMITATING FISH-LIFE
"Well, I swam and I swam and I swam. You know how a chase takes you, and somehow being unable to overtake a mere girl made it worse. But I was gaining, age and all, until just as I got close enough to sense something was wrong, she turned sidewise above two automobile tires-and I saw it wasn't a girl at all"

"I had been following a goddamned great fish-a fish with a bright blue-and-orange band around its belly, and a thin white body ending in a black flipperlike tail. Even its head and nape were black, like her hair and mask. It had a repulsive catfishlike mouth, with barbels."

"The thing goggled at me and then swam awkwardly away, just as the light went worse yet. But there was enough for me to see that it was no normal fish, either, but a queer archaic thing that looked more tacked together than grown. This I can't swear to, because I was looking elsewhere by then, but it was my strong impression that as it went out of my line of sight its whole tail broke off."
James Tiptree Jr., Beyond the Dead Reef
Read Scott's blog-post about this story here.

Posted by Michael Bukowski at 10:30 AM

Email ThisBlogThis!Share to TwitterShare to FacebookShare to Pinterest
Labels: James Tiptree Jr., Stories From the Borderland