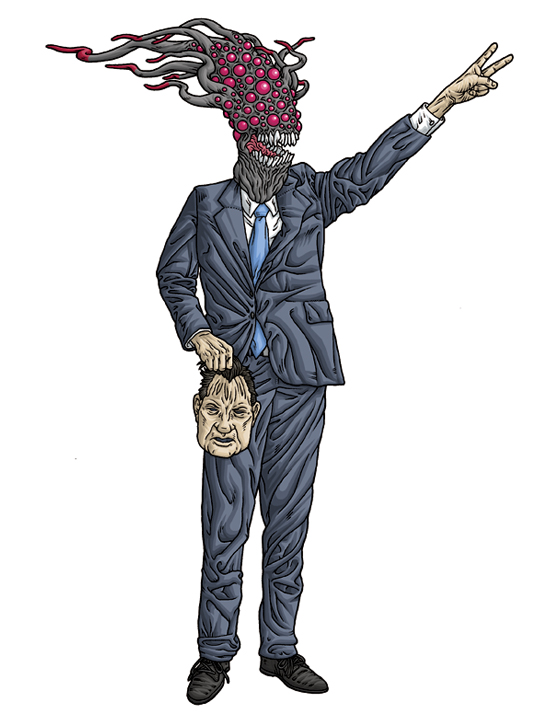 The night, the night in question, he wanted to talk about FUBELT. Things in South America were well you’ll find out about that at some point I’m sure. International machinations were always a source of  [garbled]…and for once, we’re not here to talk about politics. No...We’re here to talk about his eyes. That was the first night I saw it happen. Later, other things
happened. We can talk about later later, yes, later we can talk about everything else. Liddy, the ratfucks, the [redacted], and the [redacted] and…
[two minutes of silence]
Sorry. Sorry. My mind drifts, y’know. Like Haight Ashbury or something.

He never looked good, y’know, always stubbly in the evenings, and by then his skin was baggy. Big jowls. Ever wonder why he had such jowls? I know why. It was that night that his face slipped. Only time I saw it happen. It just slipped like... like it wasn’t his face at all, everything just moved a little bit off and I could see the cracks. I caught a glimpse of his true face. And it was… All I can say is his eyes were made of thousands of eyes. Eyes of thousands of eye.

I can tell you don’t understand, but just try, okay?! It’s important.
[audible rustling of clothes.]

Did I mention it? Fuck no. And he just talked and drank, like nothing was weird-don’t think he even noticed-And all those eyes, they were all watching me.
[garbled tape noise. Buzzing sounds. Conversation muffled.]

… Kissinger was there of course, yeah. He was always there. But it was weird. He didn’t ever turn to look back behind the desk at the big man. Like he knew what he’d see if he did. And then, just before they sent me away with my marching orders, it was Kissinger who winked at me.
From deposition unnamed White House Aide, serving 19691973.
Tape Five. Minutes 4861.
Discovered in the vaults under 18001 Yorba Linda Blvd.
Philip Gelatt, Untitled
Written Exclusively For an Illustro Obscurum Collaboration