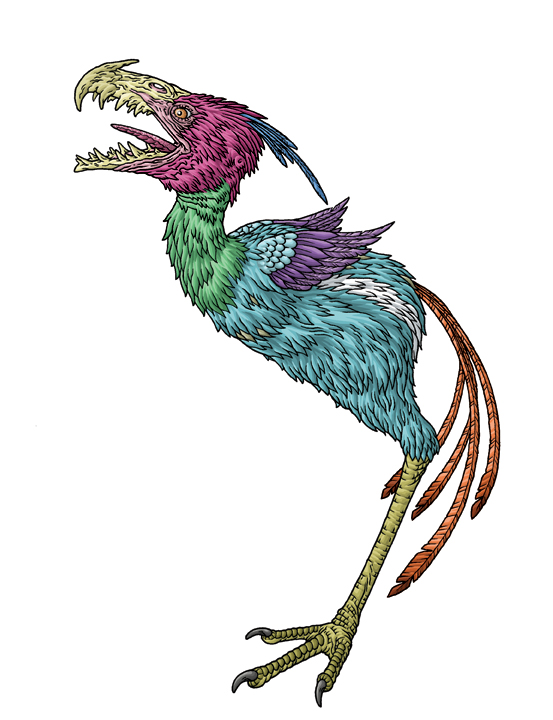 GROTH-GOLKA
"The thing that pursued the fleeing girl was neither man nor beast. In form it was like a bird, but such a bird as the rest of the world had not seen for many an age. Some twelve feet high it towered, and its evil head with the wicked red eyes and cruel curved beak was as big as a horse's head. The long arched neck was thicker than a man's thigh and the huge taloned feet could have gripped the fleeing woman as an eagle grips a sparrow."

"This much Turlogh saw in one glance as he sprang between the monster and its prey who sank down with a cry on the beach. It loomed above him like a mountain of death and the evil beak darted down, denting the shield he raised and staggering him with the impact. At the same instant he struck, but the keen ax sank harmlessly into a cushioning
mass of spiky feathers."

"The mighty blade sheared through one of the tree-like legs below the knee, and with an abhorrent screech, the monster sank on its side, flapping its short heavy wings wildly. Turlogh drove the back-spike of his ax between the glaring red eyes and the gigantic bird kicked convulsively and lay still."

"And we shall see if the god Gol-goroth shall stand against the sword that cut Groth-golka's leg from under him. Now hew the head from this carcass that the people may know you have overcome the bird-god."
Robert E. Howard, The Gods of Bal-Sagoth

"I stared at the weird, stylized profile figure of a monstrous thing like a hideous bird with weird staring eyes and gaping beak filled with fangs. There was a stark ugliness to the depiction that was quite unsettling.

"I looked up at him, a mute question in my eyes.
'Groth-golka,' he breathed."

"The moon was hidden by black, flapping shapes that circled and swooped like enormous fishing-birds, darting down to the altars to pluck and tear at the wriggling bodies bound there...and one of the huge, queerly deformed-looking bird-things emerged into the moonlight, and I stared with unbelieving horror at its hulking, horribly quasi-avian form, clothed with scales not feathers...one glimpse of the repulsive thing with its one leg and glaring Cyclopean eye and hideous, hooked, fang-lined beak-"
Lin Carter, The Fishers From the Outside

"It resembles a tremendous bird with one foot and one eye, and dwells under the mountain Antarktos, somewhere near the South Pole."
Daniel Harms, The Cthulhu Mythos Encyclopedia

*There are some contradictory descriptions of Groth-Golka. Specifically, how many eyes and legs it has. I think this was originally a confusion with Howard's quote about the man that "cut the leg from under him". It appears that in Howard's story Groth-Golka had two legs and Turlogh cut off ONE of them. Lin Carter also added to the confusion by describing the servitors of Groth-Golka (the Fishers From the Outside) as being one legged. While it does seem that Howard intending Groth-Golka to have two legs, I think one leg looks way stranger and more alien, so I kept that aspect.