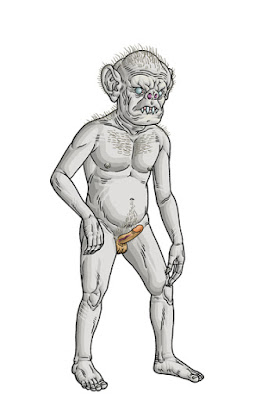 
"Instead, she saw a naked boy sitting on a rock formation, looking at the truck's flatbed. She was speechless. None of it made any sense. His nudity, for one thing. Then, there was the thing with his hair. It was dust colored, not exactly grey or white. And he had a lot of it, on his head, chest, and yes, his groin. A thick shelf of it formed a unibrow. His face was ugly, almost f(ucking)-ugly. A nose that was grotesquely upturned, eyes too big and a sickly shade of blue, bizarrely large ears furred with even more dusty hair. Connie saw his junk was erect. It was an ugly thing, an orangy-red rod. And his nails were long and filthy. But the worst thing of all were his teeth. They wer gagged and uneven. And they had a weird shine to them."

"They were sharp, glittering things, more like knives. And they were transparent, as if the woman who had hatched form the moon had a mouth full of broken glass."
Craig Laurence Gidney, The Nectar Of Nightmares