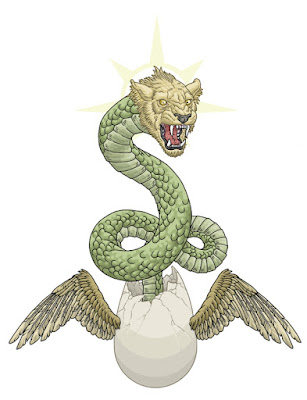 CHNOUBIS
“This ringstone bears the name of the Egyptian Gnostic solar god Chnoubis, a lion-headed serpent.”
The Penn Museum
“The lion-headed serpent was popular in magic and is often found pictured on amulets. The daimon is a syncretistic combination of the Egyptian creator god Khnum, the serpent Kneph and the star Knm.“
Hans Dieter Betz, The Greek Magical Papyri
“Kneph, a winged egg or globe with serpent or serpents.”
James Stevens Curl, The Egyptian Revival
Chnoubis is another gnostic deity and, as is often the case with ancient religions, we don't know too much about practice and there's a lot of speculation about possible origins. Scholars to believe that  Chnoubis was the Demiurge or supreme creator of the material world. His image, much like Abraxas' (with whom he is often associated with), was carved on gems to be worn as protective amulets.

The symbolism of the various parts of the god are broken down like this: 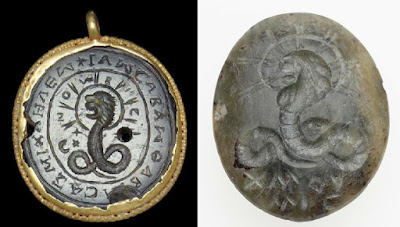 The gnostics were heavily influenced by the ancient Egyptians and Chnoubis is often thought be be an amalgam of the Egyptian creator god Khnum, the serpent Kneph, and a word for star in egyptian, kenem.

Kneph frequently appears in ancient Egyptian religious art and is often depicted as a winged egg. Under the Greek theonym Chnuphis, this figure adopts a serpent-bodied, lion-headed ("leontoeidic") visage, being particularly common in magical artifacts in Late Antiquity. It is by proxy frequently associated with the Gnostic Demiurge. 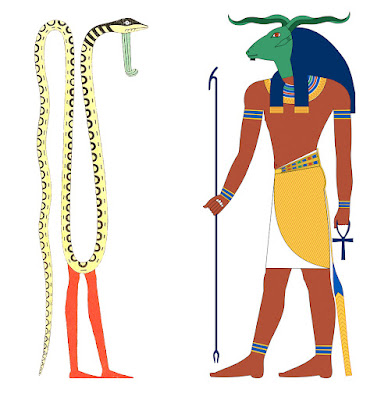 
Kneph as the winged egg is sometimes associated with the ancient Greek Orphic Egg; the cosmic egg from which hatched the primordial hermaphroditic deity Phanes/Protogonus, who in turn created the other gods. Jeanne D'Angelo's spectacular painting of the Orphic Egg is featured below. 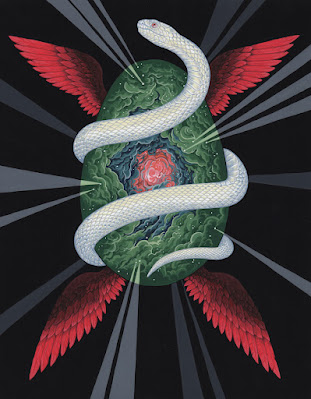 Later, some Theosophical sources tried to syncretize this motif with the deity Khnum, along with Serapis and Pluto.

I'll leave it there because that's a great segue into tomorrow's god!