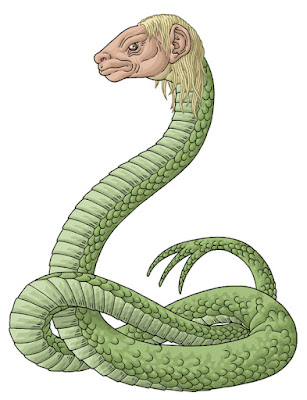 GLYCON
“In the middle of the 2nd century CE, on the shore of the Black Sea, any visitor could have had his future foretold by a divine snake with a human-like head, called Glycon. The serpent and his prophet Alexander were so respected, even the philosopher-emperor Marcus Aurelius asked them for help.”

“The serpent’s head looked out from Alexander’s beard and it bore a striking resemblance to a human face.

“When they went in, the thing, of course, seemed to them a miracle, that the formerly tiny snake within a few days had turned into so great a serpent, with a human face, moreover, and tame!”

“The next morning he leapt forth into the city’s marketplace frenziedly hailed the city as blessed for being on the point of receiving the manifestation of the god, ran to the temple side and scooped around in the mud until he dredged up the egg, breaking it in his hand to reveal the young snake, to the amazement of the bystanders, who raised a shout, welcomed the god, called the city blessed, and cried out prayers for riches and health.”

“The marble and the bronzes portray Glycon as a rampant snake with sami-humanoid face and human hair, compatibly with Lucian’s description of the god. They also tell us things Lucian does not, namely that Glycon wore his hair long in the Pythagorean fashion of his sponsor, that he boasted prominent humanoid ears with which to heed his petitioners, and a final tail that was either bifurcated, trifurcated or leonine.”

Ooooh boy does this one have a story! So, like the above quote suggests during the 2nd century CE a prophet named Alexander of Abonoteichus foretold that Aesculapius, the son of Apollo, would be born again. In the mud near the construction site of a temple to Aesculapius, Alexander dug up an egg from which hatched a small snake. A few days later the snake had grown to full size and, peeking from between Alexander's beard, appeared to have a humanoid face! Alexander named the god Glycon and became it's oracle, answering questions, making predictions and giving healing instructions. The cult of Glycon became so popular that, beginning late in the reign of Antoninus Pius and continuing into the 3rd century, official Roman coins were struck in honor of Glycon. 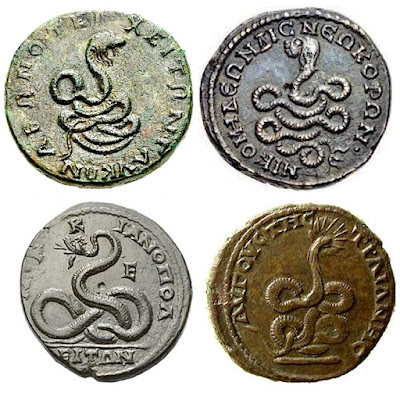 Emporor Marcus Aurelius even sought the serpent god's sage advice. This is where Lucian comes in. Lucian was a Hellenized Syrian writer and satirist and he hated Glycon & Alexander. He saw it for what it was. A hoax and a scam. Through investigations and experiments he uncovered how it was all perpetrated. The miraculously discovered egg containing a fully formed small snake? Alexander drained an egg with a pin hole, cut it in half, put a small snake inside, sealed it with wax and buried it in the mud the night before. The snake with a human face? A mask made of calfskin molded to look human....ish. The talking? A long piece of horsehair tied to the jointed mask could make the mouth move. He even wrote a satirical treatise titled Alexander the False Prophet! So Glycon went down in history as a hoax perpetrated by a fraudster. 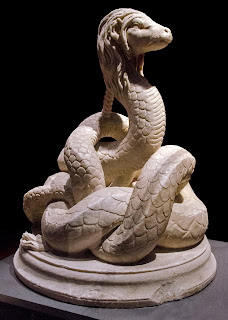 One of my favorite things though is this statue of Glycon. It was discovered in Constanța, Romania during an excavation for a railway station. The knotted, curling pose is amazing but the absolute best part is his long and flowing hair! 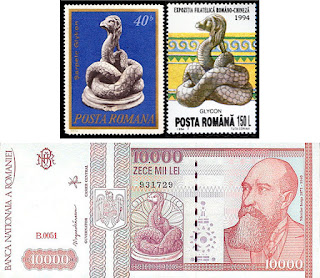 The Romanians were so taken with this statue that, after it was installed in the Constanța History and Archaeology Museum, they commemorated it on stamps and a bank note!
Most people in the US & UK probably know Glycon from Alan Moore. When Moore divulged he was a magician in 1993 he also declared himself a devotee of Glycon, stating:
"because I'm not likely to start believing that glove puppet created the universe or anything dangerous like that."

One of my favorite things in the world, though, is that my amazing partner saw me working on this drawing last October so for my birthday in early November she made me an amazing Glycon sculpture! It even had a little string to pull it's mouth open like the real one! 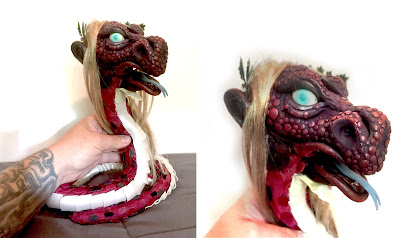 Tomorrow's monster will look even stranger, so get ready!