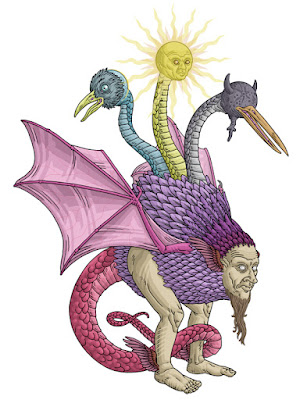 MERCURIUS
“The spiritus Mercuialis and his transformations represented as a monstrous dragon. It is a quaternary, in which the fourth is at the same time the unity of the three, the unity of being symbolized by the mystagogue Hermes. The three are: Luna, Sol and coniunctio Solis et Lunae in Taurus, the House Of Venus. Together They form ☿= Mercurius.”
Carl Jung, The Collected Works Of C.G. Jung
Three headed dragons appear often in alchemical texts and their interpretation varies. 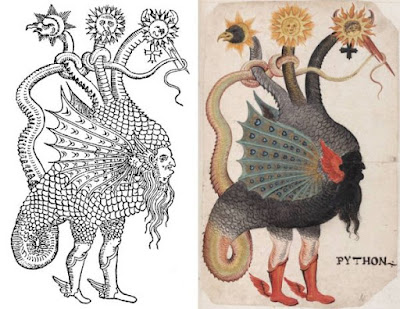 Left: Woodcut from Nazari's Three Dreams On The Transmutations Of Metals.
Right: Mercurius from the Alchemical And Rosicrucian Compendium.

Mercurius or Python Mercury is a strange symbolic creature from alchemical texts. This iteration appeared in Nazari's allegorical alchemical epic Three Dreams On the Transmutation Of Metals where the main character meets a dragon:

"Listen, see, and understand my words; and write them deep in your heart: for what I shall tell you is that which many seek, but few find; and many know and do, but few comprehend; for many see me, but few recognize me. Listen now, and understand if you can, and you will learn all: I am the Hen, or the worst and most ferocious Dragon, and I endure throughout time. I revive myself from death, and kill the death that killed me. I resuscitate the corpses that I created; and, living in death, kill myself: for which you should rejoice, since without me, and my life, you could not rejoice. I carry poison in my head, but the remedy is in my tail, which I bite in my fury. Whoever tries to sport with me dies by my penetrating gaze. Whoever bites me must first bite himself; if I bite him, death bites him in the head, unless he bites me first; for my bite is medicine for my bite. It is in the high mountains that I find my rest and repose, yet it is in the plains and valleys of the earth, and in the dunghills, that I reside; it is in the vaporous water that I am conceived, yet it is in the air and fire that I find my food. My sweat smells of the grave: he who does not understand this will learn nothing of me. Hear me: I am known to all people, races, and tribes, to the poor as well as to the rich; and they all call me worthless, and countless other names and epithets. But anyone who knew me well would call me precious indeed. I am a stranger in my own country, but known to all climates of the world.

Whoever sees me, or has seen me, does not recognize me; and whoever neither sees nor knows me, seeks me. My father and my mother conceived me, but I first conceived them. I am father and son; I am mother, father, and son; I am invisible when I fly, and impalpable when I flee through the air, but visible and palpable to the touch. Therefore recognize me, and kill me, and know that I cannot die by the sword, or other arms; but present me with a mirror, and my own reflection kills me. If you feed me in fire, so that first my members change shape; and then my body is purged of all fatal poison; and then you see my body, soul and spirit joined together; then you will prove superior to all. He who hears me, but does not understand, consumes his days in useless labors, and employs his time to no purpose."

Did you find that confusing? You're not alone. Alchemy didn't have a unified theory, which makes parsing it pretty difficult. This quote from Kurt Seligmann's The History Of Magic sums it up: "The tails are strangely knotted and knotty is the problem of how to unravel the dragon's obtuse speech."

Everything about this obscure image of Mercurius represents something, so my version is going to be "inaccurate" because, as with all my drawings, I tried to imagine it as an actual creature.

Some interpretations are obvious like the three heads at top represent, the Moon, Sun and Mercury. The moon, if you look closely, is in eclipse representing hidden meanings. Things get more esoteric from there. Some people believe the tail represents time or the end. In the original image of Mercurius, the tail wraps around the Moon & Sun showing their relationship to time or their servitude to time. Then the tail winds up in the beak of Mercury in a mishapen ouroboros. The face could be Cronos but with the wings of Mercury. Some people view the larger "dragon" wings to be be peacock wings which have their own set of interpretations. I found a lot of debate about what all this means on an alchemy forum haha!

All that is to say, that alchemical symbolism is wild and mysterious and very difficult to pin down, which is another reason I strayed from the original configuration. Because who cares! 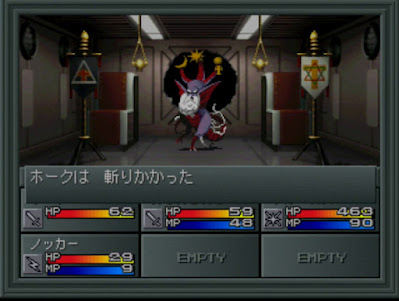 I honestly couldn't find many references to Mercurius in popular culture but it does appear in the video game Shin Megami Tensei II.

Ok this is it! The last monster of a three month stint.
But don't worry, I'm already working on more and they're very cool and weird!
Posted by Michael Bukowski at 10:00 AM