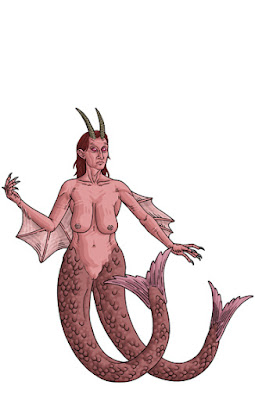 DEMON-LIKE SEA MONSTER
"In the same year (1427), a sea monster was caught and its image was distributed in the country. The upper part up to the navel was of human shape and below it was a fish. Except that the lower part was divided in two, lengthwise. It had, above the ears two growths similar to horns. It had two large breasts and a wide mouth. From the hands to under the armpits and further to the belly it had webbing suitable for swimming. So this monster was trapped: In a city by the sea there were several women walking on the shore, and to one of them - the same cruel beast came and wanted to drag to him. But the woman resisted splendidly and asked the other women for help. These ran up and seized and slew the monster with sticks and stones and pulled it ashore. it was so ghastly to behold that many were frightened by it. Its length and size were more than that of a man. It is thought to have come to the town to eat, for many children of the town who had gone swimming in the sea were lost in it and never returned. therefore they must have been eaten by the beast.
Aesop's Fables: With Aviani, Adelfonsi and Pogii, as well as Doctor Sebastian Brant
Here we are, the final creature in my collaboration with @mythical.creaturologist. This one comes with a few notes. Imi translated this text from a 1501 German edition of Aesop's Fables. The full title I truncated above is actually: Aesop's Life and Fables: With the Fables Aviani, Adelfonsi and A Number Of Invective Speeches By Pogii, As Well As Excerpts From Beautiful Fables and Examples By Doctor Sebastian Brant. Whew!
I also excised a part of her translation where the creature is described as having a beard. I the original drawing as reference that does not show the creature with a beard. 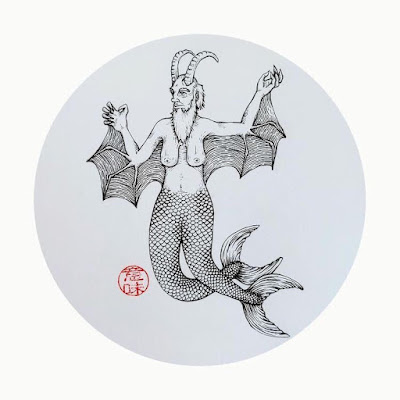 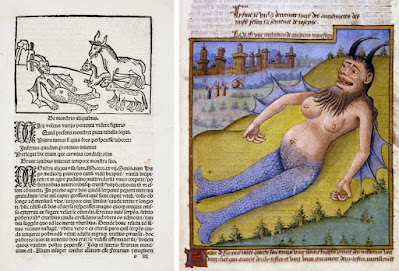 So that concludes this sea monster collaboration. I really want to thank Imi for all the work she put in with her gorgeous illustrations and finding/translating source material. I had a blast working with her and hopefully we'll be able to do it again soon!

Come back next week when we start the final two weeks of new monsters....and they're all gods!