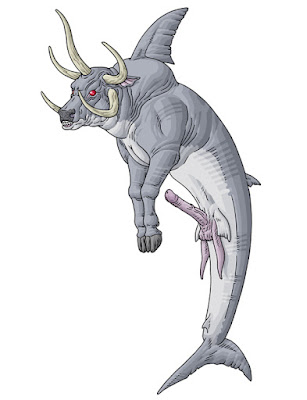 QUINOTAUR
“The Quinotaur has the head, chest and forelegs of a bull and the body and tail of a fish or serpent.”
Nicolle R. Murray, Naturally Monstrous and Magical Creatures of Western Europe
“A far older legend of the Merovingian bloodline exists. Meroveus, the progenitor, was said to be sired by the Quinotaur, Neptune’s half-bull, half-fish sea-god or demigod.”
Nialla Ni Macha, The Witches’ Almanac
This one's really strange. I actually stumbled across it while watching an episode of the UK quiz show QI.
The creature supposedly fathered Meroveus by raping the wife of the Frankish king Chlodio and thus to have sired the line of Merovingian kings.

Quinotaur literally translates to "bull with five horns". There's speculation that the three top horns are meant to mimic Neptune's trident while the other two are a reference to the Minotaur. 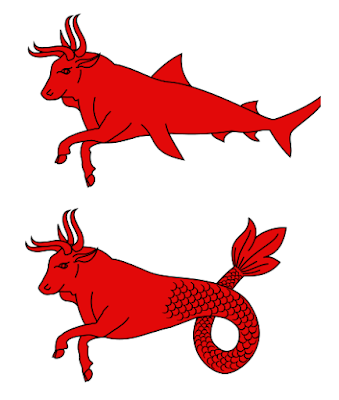 The illustration on wikipedia (credited to Jacques63), gives two different versions of the quinotaur; one with a traditional  scaly fish body and the other, that of a shark. I used the shark version because I liked the grotesque idea of human genitals protruding from between shark claspers and a tall dorsal fin atop a bull's hump.

There's not too much information about the Quinotaur. In fact, there's only one reference in the historical record; An unknown author(s) wrote a history of the Franks, known as The Chronicle Of Fredegar, in the 7th century AD which is the only time the Quinotaur is named. Actually, even the name is suspect. The Chronicle uses it as a discription rather than a name: "the beast of Neptune which resembles a Quinotaur." Since a Quinotaur wasn't a thing, it can be assumed the author was simply trying to say "a five horned bull". 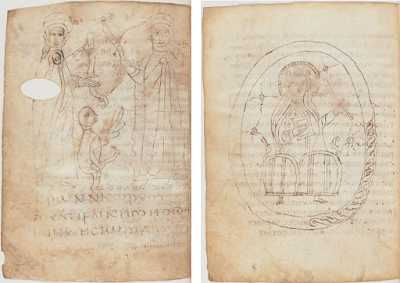 Two illustrations from The Chronicle Of Fredegar.


Some scholars believe the Quinotaur wasn't ever actually described and that it was a mistranslation by an Christian translator:

"According to him, as the Frankish king Chlodeo was taking a summer bathe with his wife, when she was attacked by some short of sea beast, which Fredegar described as something like Neptune or the Minotaur, and thus it was unknown if Meroveus was conceived out of the man, Chlodeo, or the Beast, the Minotaur. Whether the legend merged the two concepts – the sea God and his symbolic animal – into one or whether the Christian author did it, we have good evidence that links the Merovingian dynasty, at its very foundation myth, with a cult of fertility, probably connected to early Germanic Nerthus or late Scandinavian Njörđr/Freyr."
Eduardo Fabbro, M.A., The Journal of Germanic Mythology & Folklore: Germanic Paganism among the Early Salian Franks
Posted by Michael Bukowski at 10:00 AM